You probably know that, for natural number exponents anyways, exponentiation can be treated as repeated multiplication.

. You probably also know, however, that exponentiation isn’t solely defined for natural number exponents. Raising a number to the power of

, for example, gives us its multiplicative inverse (if it exists), and

is just the square root of

When I first learned this, I began to wonder if repeated exponentiation, or tetration, could be extended to non-integer heights. In other words, I wondered if it was possible to make sense of

in the same way we can make sense of

My first thought was to find any nice properties that tetration satisfies so that I could use those to at least extend tetration to real heights. However, because exponentiation isn’t associative, properties like

don’t carry over to tetration (so

in most cases). In fact, the only real nice property of tetration comes from its recursive definition:

. This meant I’d have to be more clever to find the most ‘natural’ extension of the tetrational to non-integer heights. Eventually, I gave up on the problem and moved on to other things.

Around six years later, however, I learned that there is, in fact, a way to systematically find non-integer iterates of certain functions, including exponential functions. This makes evaluating, say,

possible. Not only that, but the way in which we can find non-integer iterates of functions is strikingly similar to one of the more well-known methods of finding non-integer powers of certain square matrices.

As a refresher, linear transformations are functions between vector spaces which preserve addition and scalar multiplication. Specifically, if

are vector spaces over a field

is a linear transformation between

, then for all vectors

This allows us to represent vectors as columns of scalars. If

is a vector space over the field

is a vector in

is an ordered basis of

, then we may represent

by the coordinate vector

, by the way, are known as the coordinates of

is another vector space over

is an ordered basis of

is a linear transformation, then for each

can be written as a linear combination of vectors in

This means that, as long as we know the coordinates of

, all we need in order to find the coordinates of

are the coordinates of

. We may write these coordinates in an

rectangular array known as a matrix.

Notice how for each

-th column of the matrix above is just

is yet another vector space over

is a basis of

is a linear transformation, then, letting

we define the matrix product of

so that matrix multiplication acts like the composition of linear transformations.

has the same number of columns as

in this case). This is because the domain (the set of inputs) of

Matrices with the same number of rows and columns are known as square matrices, and what makes square matrices special is that they can be multiplied by themselves. This means it makes sense to recursively define non-negative integer powers of square matrices. Specifically, if

matrix, then we define

is invertible (i.e., there exists a matrix

are known as diagonal matrices, and they have the nice property that raising them to a given power is the same as raising their entries along the main diagonal to that power.

This gives us an easy way to compute arbitrarily high powers of diagonalizable matrices, matrices which can be written in the form

is a diagonal matrix and

is an invertible matrix.

Notice how the adjacent

’s cancel each other out.

composed with itself a certain number of times is known as an iterated function. Normally, we denote

raised to the power of

instead to avoid ambiguity.

, by the way, is the identity function, which maps each element of

, then we can define

Now in dynamics, its often useful to consider dynamical systems defined by functional iteration, treating the number of iterations

, evaluating such a system’s state at

is as simple as applying some function

or its inverse to the initial state

a certain amount of times.

, however, it’s not that easy. I mean, you can’t apply

a non-integer number of times, so if we want to construct a smooth orbit for our dynamical system, we’ll have to find the fractional iterates of

. This is akin to the problem of finding fractional powers of square matrices, which we’re able to do via diagonalization, so the question is: can we do something similar to find fractional iterates of real/complex analytic functions?

Surprisingly, the answer is yes, and the analogue to diagonalization for analytic functions is Schröder’s equation, named after German mathematician Ernst Schröder (not to be confused with Erwin Schrödinger).

, we are asked to solve for a function

in the domain of

, then we can apply

to both sides and obtain

and you might see where this is going from here. Iterating

Functional iteration has now been transformed into exponentiation! What this means is that, as long as we can solve for

, we can solve for

But how do we solve for

? How can we tell whether or not a solution for

No matter our choice of

. Indeed, we see that

. However, this solution isn’t helpful because it’s not invertible, or in other words,

So, let’s assume that a non-trivial solution to Schröder’s equation exists. Typically, solving for constants is easier than solving for functions in a functional equation, so a good first course of action would be to solve for

with a value which simplifies our expression somehow. A good candidate would be a fixed point of

, which we’ll denote by

into Schröder’s equation gives us

and we’re now left with only two possibilities: either

, then Schröder’s equation becomes effectively useless for finding iterates of

, so we’re left with

Thus, we’ll only focus on the case where

. Taking the derivative of both sides of Schröder’s equation with respect to

and once again, we’ll substitute

into this new equation.

to be analytic at

is not analytic at

to be analytic at

As a side note, there are three types of fixed points of differentiable functions.

is said to be attracting if

is said to be repelling if

is said to be neutral if

is said to be superattracting if

To answer whether or not a non-trivial solution for

exists, we turn to a sufficient, though not necessary, condition given by French mathematician Gabriel Koenigs in 1884: if

is analytic on the unit disk centered at

, then we are guaranteed a unique analytic function

, by the way, is known as the Koenigs function.

, we first note that

. With this, we can find the linear approximation of

We can improve this approximation by substituting it into Schröder’s equation as such:

on the right-hand side, we get

We can do this again to get an even better approximation.

In fact, we can keep doing this to obtain better and better approximations of

Taking the limit as

Indeed, we can check that

is an attracting fixed point of

roughly exponentially decays at the same rate that

, so the entire limit converges for

within a certain neighborhood of

Through similar reasoning, one can show that

can be expressed by the limit

This raises the question: does a representation of analytic functions exist, and if so, would Schröder’s equation translate into matrix diagonalization under such a representation?

. By the analyticity of

. We may interpret this sum as a dot product of two infinite-dimensional vectors.

It’s tempting to consider the row vector a representation of

, the column vector a representation of

matrix a representation of

is to be represented by an infinite-dimensional column vector, then so should

should be represented by the column vector

, so instead of representing

by an infinite-dimensional row vector, we must instead represent it by the infinite matrix

-th coefficient of the Maclaurin series of

. Indeed one can check that, 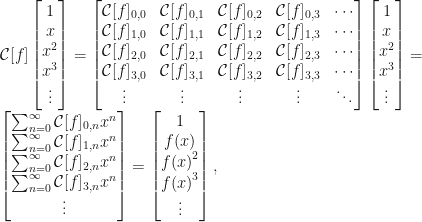 is a valid representation of

as the Carleman matrix of

Under this representation, Schröder’s equation translates into

can then be readily worked out as

which is a diagonal matrix! The punchline is that Schröder’s equation does, in fact, translate into diagonalization under Carleman’s matrix representation of analytic functions.

is a diagonal matrix for any

to both sides of Schröder’s equation and replacing

to both sides of Schröder’s equation and replacing

is a superattracting fixed point of

in the interior of the Shell-Thron region, the set of

has the attracting fixed point

), so Schröder’s equation can be used to find and calculate

We can also calculate the inverse of tetration, known as the super-logarithm, using Schröder’s equation. We denote the base-

We can also define a function, which I’ll call the product tetrational function and denote with

As it turns out, the equality

, so we’re left with a valid extension of

A similar function, which I’ll call the sum tetrational function and denote with

, can be defined by

and it can readily be shown that

so we can extend

controls the branch cuts of

is a fixed point of

in the interior of the Shell-Thron region.

is the principal branch of the natural logarithm. Complex exponentiation isn’t always well-defined since logarithms are multivalued functions, so in most cases, we have to choose a principal value. For example, we choose

to be equal to

by convention, but we could also choose

to be equal to

† Koenigs’ original statement has the extra condition that

. However, it’s possible to show that this seemingly stronger statement in this post is, in fact, equivalent to the original, which I’ll leave as an exercise for the reader.

Special thanks to Grant Sanderson and James Schloss for hosting the annual Summer of Math Exposition.